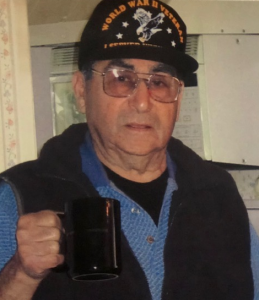 Hallmark-type TV stories have become common.  But this story struck a chord.  It’s about a Dad, a coal miner with soot still on his face, who shows up for his son.  It brought back memories of my Dad,  You can select this LINK to the story.

My Dad (photo) may not have had soot on his face.  But he often rushed from work, still in his work clothes, to watch my brother and me play baseball.
We would always see Dad in the bleachers with Mom.

Another favorite Dad memory occurred at my 1st high school B-team football game.  I spent the game on the bench.  It was an away game loss.
After the game, the coach gathered the team under the goalposts.
I headed in a different direction.

I saw my Dad standing nearby behind a chain link fence.  I ran to him.

Dad had arrived late to the field. He asked if I got into the game.
I said no.  He said, “You’ll get your chance.”  Then I heard the coach.
He was upset.  He was calling me to join the team.
Dad said, “You better go.” I did.

Confronted by the coach, he yelled, “What are you doing?”
I emphatically said, “That’s my Dad.”
And my 14-year-old naive eyes communicated, “And you’re not.”
To the coach’s credit, he immediately recognized his 2nd string status.
He calmly said, “Join your teammates.”

By the way, I started the next game, which continued into my varsity senior year.
And Dad and Mom were still in the stands.